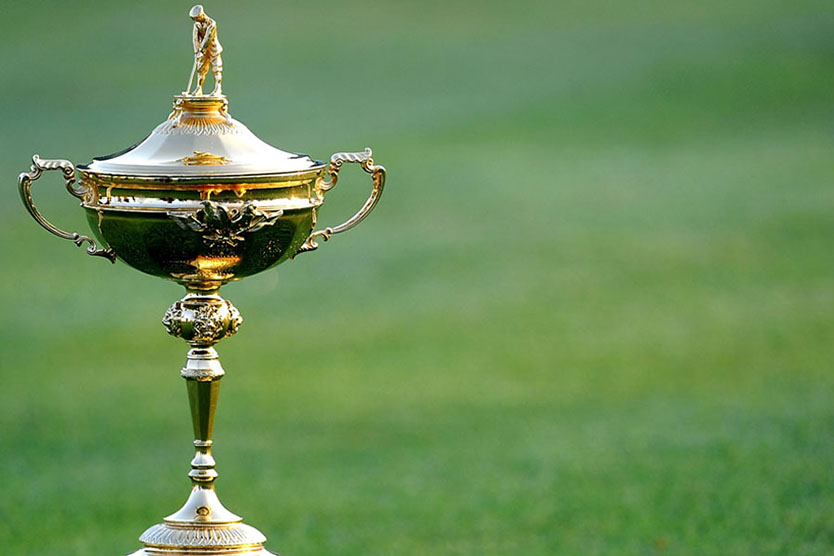 For the most part, when it comes to golf, it’s every man (or woman) for themselves. You and that errant little white ball, striving to beat the par for the course.

It is a game of focus, precision, and determination. For this reason – and the fact that it keeps the doctor off your case and puts a fair few yards between you and your spouse/office/kids* (delete as applicable)– it is a popular way to unwind.

Concentrating on one golf ball takes your mind off all the other balls you’re juggling, just for a few blissful moments.

Fun though it may be, to join friends in a round of golf, it is not a game often associated with team-spirit. As in business, at a professional level of golf, the ability to focus with single-mindedness can be the difference between success and failure. When it comes to the Ryder Cup, that mindset is put to the test when twelve of the very best European golfers join together to compete against a team of the finest from the United States. The result is a highly-charged atmosphere that is as unforgettable an experience for the spectators as it is for the players themselves. So what role does the sense of team-spirit have in the unique magic of the Ryder Cup?

Due to the ‘match play’ format, the Ryder Cup teams and their respective fans share a common dream, in much the same way as a football team and its fans. This differs from most ‘stroke play’ golf tournaments where spectators often support one or two favoured players, or are perhaps only watching to witness these masters at work, without any passionate interest in the end result. However, the collective emotions experienced during the shared highs and lows of the Ryder Cup not only enhances the atmosphere, it also deepens the sense of bonding further. This powerful support correspondingly motivates the players in ways they may otherwise only experience when leading a major stroke-play tournament. It is this sense of being ‘in it together’ – whether in a primary or supporting role – that also proves so successful in companies where team-spirit is actively fostered. Seeing others excel can be inspiring to some, but when they feel a valued part of something bigger, the motivational effect on teams, and indeed their leaders, can be immeasurable.

The shared dream, when put into practice, becomes a shared goal. So, when play commences, the dream of winning the Ryder Cup becomes a more immediate goal of winning the current hole. At this point, the communication between team members becomes paramount. Not just on the course, but in the locker rooms before and after each round. A team’s ability to understand each other, and know how to temper their mid-game highs and lift their lows, will have as much of an impact on their performance as the club they choose.

Golf is a mental game and it is important to keep your mind on the goal, or in this case, the hole. However, we are only human and we all have strengths and weaknesses.

To enhance the strengths and mitigate the weaknesses, team-players must be able to read each other’s mental game and offer support at just the right moment, while also respecting their space to ‘get in the zone’. By helping to keep each other on target, the whole team benefits. Again, in everyday life, this sense of mutual support and understanding has obvious benefits – not only on professional performance but also personal mental well-being.

Undoubtedly, success on the golf course, as in all areas of life, is down to much more than team-spirit. But when you witness the incredible atmosphere at the Ryder Cup, you can’t help but be uplifted and inspired. The central premise of the game remains the same: one man, one ball and several frustratingly small holes in elusive positions. Yet here, uniquely, you see what happens when the mindset becomes less about ‘me’, and more about ‘we’. When facing their ball, the players are no longer alone. They stand with a mighty force behind them. And it is this force, powering world-class professional golfing talent, that makes the Ryder Cup so successful – and utterly unmissable.

If you want to witness the incredible atmosphere of the Ryder Cup yourself, why not take advantage of Victor’s seamless day-return offering. This year, it’s the 40th Ryder Cup at Gleneagles in Scotland, the home of golf – it promises to be the best yet!