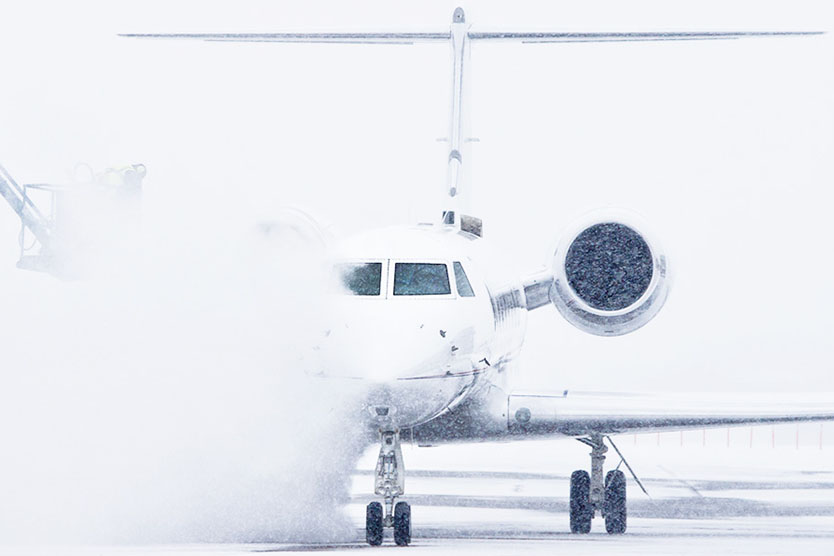 Taking a credit card to your car’s windscreen to scrape off the ice is fine, but it’s not going to work on an aircraft. Moving parts can be hampered ice and operators need to ensure an aircraft is fit to fly safely.

In fact, it’s illegal to takeoff in an aircraft that hasn’t been sufficiently de-iced. However, the cost of de-icing can significantly increase the cost of your flight.

De-icing varies from around £250 for a small propellor plane to up to and above £5,000 for an airliner.

A small private jet usually requires around 200 litres of heated de-icing fluid, which costs around £5 per litre. Subsequently a charterer can be landed with an extra bill of £1,000.

De-icing can be avoided if an aircraft is kept in a heated hanger prior to takeoff. Although the cost of renting such a facility overnight can often be more than de-icing. Victor will be able to advise.

If de-icing is the only option, and conditions are particularly poor, you will need to be on board when the jet is being de-iced. This will allow you to depart as soon as the procedure is completed. Any delays may cause the process to have to be repeated.

In addition, ensuring your crew knows exactly when you’ll be arriving at the terminal, will mean the de-icing will be timed correctly and efficiently.

If possible, avoid flying early in the morning or before dawn. In most cases, the sun will melt surface ice, thus reducing the amount of de-icer required.

You should also always ask Victor whether the cost of de-icing is included in a quote. In cases where it is not, Victor suggests taking out a de-icing insurance policy, where available. The cost of such an arrangement is around £165 for an aircraft the size of a Citation Mustang.