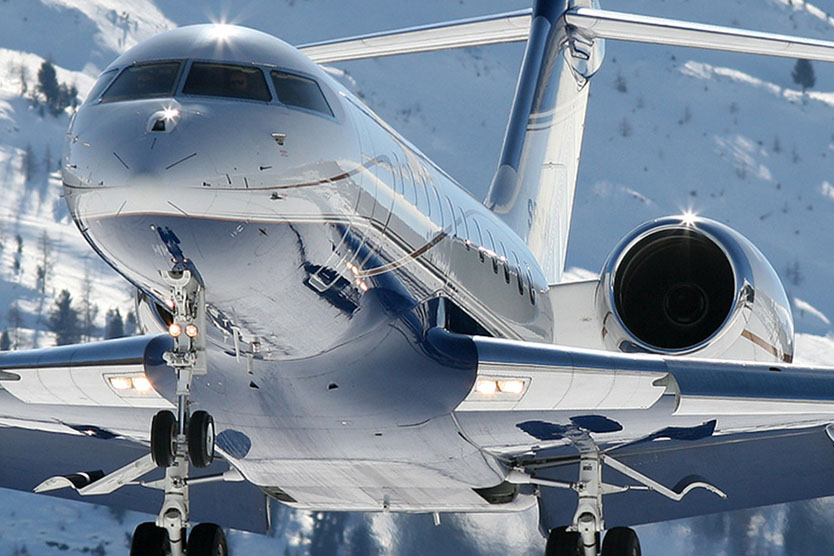 As temperatures drop and nights draw in, we can all take consolation in the fact that the ski season is just around the corner.

Subsequently, we’ve pulled together five of the best Alpine ski resorts that are located just minutes rather than hours away from airports accessible via private jets.
Victor’s official travel partners, Ski Boutique, have also singled out the finest luxury chalets that are available to rent in each destination.

Why Courchevel? Located within Les Trois Vallées, Courchevel 1850 is considered by winter sports aficionados as the ultimate resort. It enjoys one of the longest ski seasons and has the best snow cover of the entire Alps. Courchevel 1850 is located in a wide bowl with numerous ski runs leading directly into the centre of the resort.

Après Ski: Michelin stars glisten in the moonlight in Courchevel 1850. The small and unpretentious Azimut restaurant has one, while Les Airelles (pictured above) and Le Chabichou both have two to their names. The nine five star hotels found in the resort all offer exquisite lounge bars, while those looking for something a bit livelier battle out lobster fuelled karaoke at Tremplin, or take in the live music at the Mangeoire piano bar.

Where to Stay: L’Apogée is a trendy new hotel that opened in December 2013. Guests can ski in and out, or stay put and enjoy meals prepared by a Michelin-starred chef. Alternately, try the more traditional Le Lana, which is one of the best located hotels in the resort that boasts a heated indoor pool, a fitness centre and a Clarins Spa.

Distance: 60km/37 miles – 60 minute drive
Morning slots at Chambéry are pre-booked by airlines, so the airport can only be accessed from midday onwards. Chambéry operates as a ‘Visual Flight Rules airport’. Therefore, no flights can arrive or depart after dark unless a specifically trained crew is flying the aircraft. Courchevel does have its own airport, Courchevel Altiport international, which is located at the heart of the resort. However, owing to its short runway (525m/1,700 feet), its uphill gradient and steep approach, the French Aviation Authority only allows privately owned private aircraft operated by the owner to land and not jets that are being commercially chartered.
Example Flight: London Luton (LTN), UK – Chambéry Savoie (CMF), France, £5,513.
Aircraft Type: Citation Mustang
Passengers: 4
Flight Time: 1 hour 46 minutes

Who Goes? European royals and members of the aristocracy, including Prince Charles, the Duke and Duchess of Cambridge, Prince Harry and the King and Queen of Sweden.

Après Ski: Discretion is key in Klosters, but you’ll still see some of the resort’s blue blooded patrons throwing shapes in the ski town’s nightspots. The late Princess of Wales was a fan of the Casa Antica nightclub, which is famed for keeping personal bottles of vodka behind the bar for customers. The Chesa Bar in the understated Chesa Grischuna hotel is another favourite hangout of the royals as well as Hollywood stars of the past including Gene Kelly and Greta Garbo.

Where to Stay: Prince Charles allegedly favours a suite at The Walserhof Hotel when he’s in town. Other popular hotels include The Alpina and the boutique style Sunstar.

Why St Moritz? St Moritz was the first luxury ski resort (150 years and counting) and remains one of the most renowned. Its frozen lake setting and altitude of 1,800m guarantee year round winter sports, including ice cricket and the world’s most prestigious winter polo tournaments. St Moritz is surrounded by 350km/217 miles of incredible runs and enjoys on average 322 days of sunshine per year.

Après Ski: The above mentioned Kings Club is the place to be seen. Hemingway’s Club is also known for its lively ambience and very late opening hours – 11pm until the last guest leaves. When in the town centre, eat at Chesa Vegalia, when on the slopes, be sure to try the stunning La Marmite, which is housed in a bright yellow brutalist structure, perched some 2400m/8,000 ft up the side of a mountain.

Where to Stay: Badrutt’s Palace Hotel has been a St Moritz mainstay since 1896. With its landmark tower, six acres of private lakeside grounds and no less than seven restaurants, this classic luxury hotel truly is the heart of St Moritz. Equally prestigious is the five-star Suvretta House, which has its own private lift and ski school.

Why Verbier? As the main resort of Switzerland’s largest ski area, the 4 Vallées, Verbier has access to 412km/256 miles of downhill skiing across 193 pistes. Capitalising on the resort attracting a younger, sportier clientele than the more traditional luxury resorts, W Hotels chose Verbier for their recently-opened first Alpine outpost (pictured above).

Après Ski: 1936 Bar’s name refers to its altitude rather than its vintage. Housed in a number of Mongolian yurts, complete with big sofas and cosy wood stoves, 1936 is one of the best spots to watch the sunset before the final descent of the day. For later in the evening, head to the heaving Casbah nightclub, which is part of the Farinet Hotel and famed for its North African décor and vibrant, youthful energy.

Where to Stay: These days it’s all about the newly opened W Verbier. Chic minimalism, in-room fireplaces and two restaurants featuring Michelin-starred Catalan chef Sergi Arola’s modern menus – make up the Alpine offering from the US hotel giants. Slightly more under the radar, yet no less luxurious, is Le Chalet d’Adrien with its indoor and outdoor pools and unrestricted panoramic view of the resort and surrounding mountains.

Why Zermatt? The car-free luxury resort, with views of the Matterhorn (arguably the world’s most photogenic mountain), is encircled by 350km/217 miles of pistes. Sitting at an elevation of 1,600m/5,240 ft, Zermatt enjoys snow 365 days per year.

Who Goes? Madonna, Brad & Angelina, and Bryan Adams have been spied on the slopes surrounding the luxury resort, while Phil Collins and Anni-Frid Lyngstad (AKA the dark haired one of ABBA) call the German-speaking town home.

Après Ski: Zermatt and the surrounding slopes boast the highest density of gourmet restaurants in the world. You can even hire a guide to take you on a gourmet ski tour of the mountains. Chez Vrony has provided wholesome locally produced fare 400m/1,300 ft above the town for the past 100 years. Back in Zermatt, if you throw a snowball chances are you’ll hit a Michelin starred restaurant. After Seven at the Backstage Hotel recently received its first star under celebrity chef Ivo Adam and is well worth a visit. For night owls, indulge in a cocktail at Papa Caesar, the upstairs bar in Zermatt’s nightlife hub, The Hotel Post. Whilst those looking to dance of the stiffness picked up on the slopes could do worse than checking out night-club, Schneewittli.