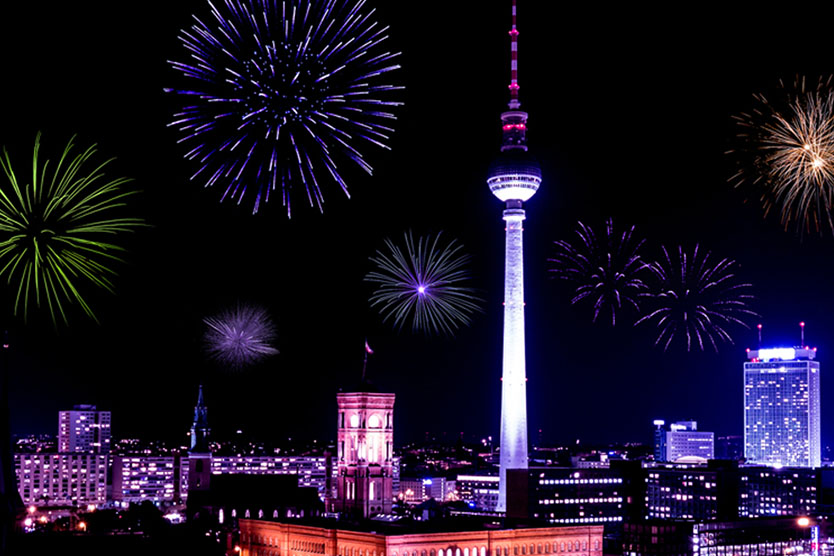 Edinburgh’s Hogmanay lasts three days and is widely considered to be the best New Year celebration in the United Kingdom. In fact, Hogmanay has been the biggest seasonal celebration in Scotland since Christmas was effectively banned during the Protestant Reformation of the 16th century. These days Edinburgh is awash with revellers taking part in the traditional torchlit procession and street party. Book a table at the Hogmanay Gala Ball at The Balmoral to enjoy uninterrupted views of the world famous fireworks at midnight set against the backdrop of the city’s glorious castle.
Edinburgh Airport (EDI)

Berlin has made a name for itself as Europe’s party capital and New Year’s Eve is an opportunity to party all night long. You can join over one million people at one of Europe’s biggest street parties, staged between the Brandenburg Gate and the Victory Column. Alternately, you can look down upon the celebrations from one of the city’s many super-stylish terrace bars, including the Hotel de Rome’s Rooftop Terrace.
Berlin Schonefeld (SXF)

If straddling time zones to welcome in the New Year twice in one evening appeals, then charter a jet to Tornio in Finland. The Lapland town borders the Swedish settlement of Haparanda and is linked by a five-minute walk across a bridge over the Torne River. Locals typically enjoy the fireworks on the Finnish side before strolling over to Sweden for a second celebration an hour later. If you’re looking to continue the party, head north to Sweden’s world famous IceHotel, which is situated 200 kms north of the Arctic Circle in the Swedish village of Jukkasjärvi. The structure is built afresh every year from over 30,000 tonnes of ice and snow and takes nine months to assemble.
Kemi-Tornio Airport (KEM)

As tradition dictates, the gothic spires and medieval squares of Prague echo to the sounds of popping champagne corks and handheld fireworks, as the citizens of the Czech capital take to the streets in the run-up to midnight on the 31st December. Dress up warm and brave the streets for a heaving bar crawl before heading to one of the city’s many baroque bridges to take in the midnight pyrotechnics. If you’re looking for somewhere to raise a celebratory glass, the impressive Mandarin Oriental is an excellent choice.
Prague Ruzyne (PRG)

With the edifices of Rome as a backdrop, one merely needs to take to the streets to experience a spectacular New Year’s Eve. Whether you follow the hoards around the Colosseum and the Spanish Steps – or take to one of the city’s hilltops (Gianicolo is where locals converge to down Spumante and launch over-the-counter fireworks) – Rome has something for everyone on the 31st December. The Via della Conciliazione hosts live bands and traditional food, while classical music and the explosions of fireworks resound around the stunning Villa Borghese. For those looking to extend their stay, the Portrait Hotel is the place to be this New Year’s Eve. This super-stylish boutique hotel is owned by the Ferragamo fashion family and is found above their store on Via Condotti. It also boasts one of the city’s finest roof terraces.
Rome Fiumicino (FCO)