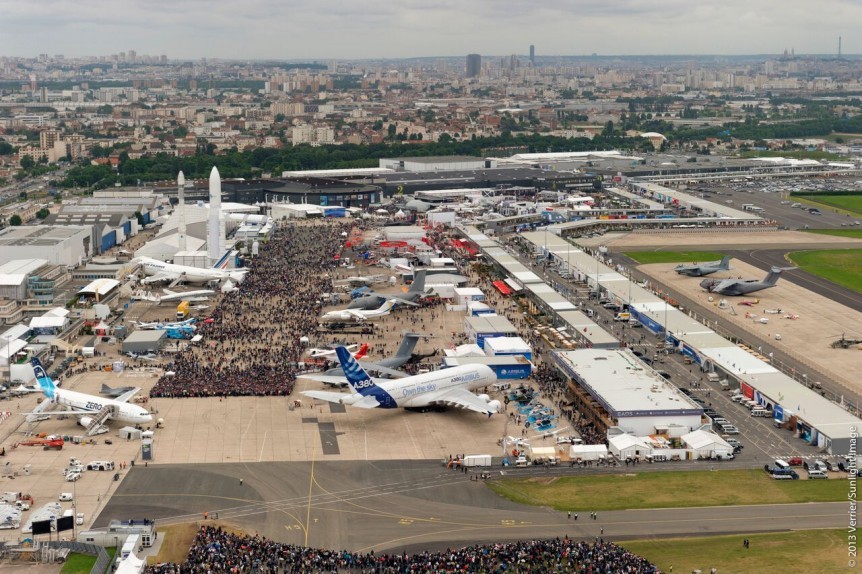 The undisputed jewel in the crown of the international air show circuit is taking place this week at Le Bourget, Paris, and is a must for aviation enthusiasts.

Famed for showcasing the very latest in aeronautical technology, the International Paris Air Show boasts stunning flying and static displays with well over 100 craft on show. This year, the show will host around 2,260 exhibitors from over 45 countries.

With so much going on, it’s crucial to keep abreast of all the action. Brand new for this year is the Paris Air Show app, which allows visitors to access up-to-the-minute news from the event, exhibitor information and schedules for the spectacular flying displays.

A focus for this year is also expected to be the future of cabins, with designers attempting to maximize capacity and also bridge the gap between economy, business and first with new five-class cabins.

The most eagerly anticipated debutant in 2015 will likely be Bombardier’s long-awaited C Series narrow body airliner.

Bombardier claims its test plane burns 20 per cent less fuel than similar aircraft in production and the manufacturer is expected to reveal more performance data at the show. The C Series are rumoured to be extremely quiet craft and with the CS300 taking to the skies, visitors can judge for themselves.

Up, Up and Away: The Flying Displays

Approximately 40 civil and military craft will take part in the daily flying displays, with the performances running from around 12.30 to 4.30pm.

In addition to some of the most exciting new aircraft taking to the skies, the Patrouille de France Acrobatic Team will make a special appearance during the public days.

Large screens have been erected around the park to ensure spectators can enjoy all the action close up.

In addition to the commercial big-hitters, Paris is one of the key events for the defence aircraft network. The US military is making a return to the show, with an impressive demo of military craft including the formidable A-10 Tankbuster in the static showcase.

In the US Pentagon paddock, the P-8 Poseidon is top of the crop, particularly as it’s tipped to be the eventual replacement for the RAF’s Nimrod MPAs.

The Pakistan Air Force is making its show debut this year with the Sino-Pakistan JF-17 light fighter. One JF-17 will participate in the flying display while another is on show in the static display. However, there will be no military aircraft from Russia at the 2015 event this year.

No air show would be complete without an update on the luxury jet market and Paris delivers with a wide range of bizjets and GA aircraft.

French Home team Dassault is bringing three aircraft including the Falcon 2000LXS, which it claims can land an impressive 90 per cent of its maximum take-off weight.

Gulfstream will also be showing off two of its aircraft; the G450 and the revered G650, which recently won the US Collier Trophy for Aeronautical Excellence and is one of the fastest private jets in the world.

The Future of Flight

As always, new technologies play an exciting role in the Paris show and the event boasts the most innovative aeronautical developments from eco craft and hybrid engines to one-man jet packs.

The Airbus Group will be showcasing their electric E-Fan prototype, its answer to green, quiet flight. The company is also expected to have its follow-on, the hybrid-electric E-Fan 2.0, named the ‘Tesla of the air’ as a full-size mock up.

France’s Civil Aviation Research Council will also be presenting their exhibit entitled ‘The Sky of Tomorrow’, which focusses on the future of civil aviation and reducing the aeronautical carbon footprint.

The Internet of Things will take centre stage and in the wake of recent aircraft losses, safety developments, including real-time component tracking, are likely to be a key talking point.

For enhanced passenger experience, internet connection (especially on long haul flights) is still a major focus for commercial carriers and new developments to enable ‘connected flights’ will also be on display.

Drones and unmanned air systems will continue to be one of the fastest growth areas and new options will be on show all around Le Bourget. Likely discussions will include future applications and safety regarding drones and aircraft utilising the same airspace.

For the first time ever, your ticket to the Paris Air Show gives you free entry to the Air & Space Museum – one of the only museums in the world to cover aerostats, aviation and space flight. Be sure to leave enough time to explore the museum as there are over 150 aircraft on display, from early prototypes to Concorde, the Point d’Interrogation and the classic the Spitfire – one of the last on display.

Victor can fly you right into Le Bourget airport, but please note that landing slots are in high demand and subject to availability.

Fly with Victor to Paris