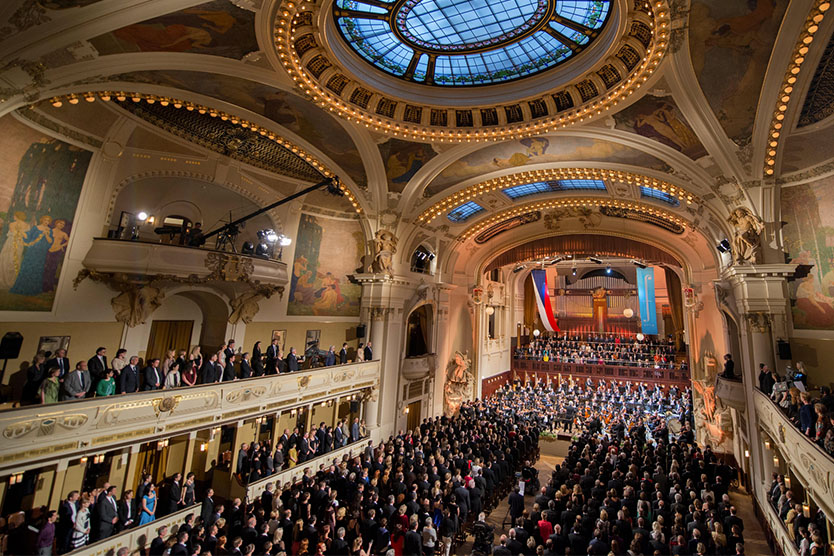 Prague is a multifaceted European city: hedonistic, whimsical and with a rich, storied past, this medieval gem gives Paris a run for its money. A honeycomb of cobbled streets, picturesque courtyards and chocolate box architecture, Prague is outrageously pretty (and for further bragging rights, it’s home to the largest ancient castle in the world). Add to this its elegant cafes, quality restaurants and trendy bars – serving the beer the country is revered for – and there are several good reasons to ‘Czech’ it out.

This year marks the 700th anniversary of the former Czech King and Emperor Charles IV’s birth – without him there would be no University, no famous stone bridge or St Vitus’ Cathedral – so the city of Prague will celebrate him with a series of events.

The Prague Spring International Music Festival – which commemorates its 71st anniversary this year and will run from 12th May until 4th June – will honour Charles IV with recitals of work from his era. The Festival has become renowned for showcasing the most distinguished performing artists, symphony orchestras and chamber music ensembles from around the world. Czechoslovakia has a close connection with classical music: Antonín Dvořák was born close to Prague, the city’s River Vltava was the inspiration for composer Bedřich Smetana’s symphonic masterpiece The Moldau, and Mozart chose Prague to premiere his opera, Don Giovanni.

In 2016, the festival will present 50 classical concerts across 17 concert halls, including the Dvořák and Suk Halls at Rudolfinum, the New Town Hall, Liechtenstein Palace and the Convent of St Agnes.

The work of 98 orchestras, ensembles and soloists from 23 countries will be featured across the event. This year, there will be an emphasis on music from the Baltics and Spain, highlights of which include the Flamenco legends La Lupi and Antonio Canales and the singer Gabriel de la Tomasa, all of who will immerse the audience in the sights and sounds of the Spanish artform.

Other appearances causing pre-Festival chatter include the two-hour show by Shanghai Kunqu Opera Troupe, famous for having won a Chinese nationwide competition for Chinese opera in 2014; also Seong-Jin Cho – winner of the International Fryderyk Chopin Piano Competition in Warsaw – and the 18 year old jazz guitarist wunderkind Andreas Varády, who Quincy Jones dubbed one of the most gifted musicians on earth. And on May 18th the Tiburtina Ensemble will honour Charles IV by performing the monastic music of his era. In an inspired choice of venue, these spine-tingling sounds will reverberate through the Convent of St Agnes, Prague’s oldest surviving Gothic building.

Where to Stay: The Four Seasons

The Four Seasons is one of Prague’s most luxurious hotels – it’s a stone’s throw from the Vitava River and Charles Bridge, and overlooks Prague Castle. The rooms are spread across four buildings, each with a different architectural style: baroque, renaissance, modern and classical. The concierge here can use their contacts to book hard-to-get tickets for the festival’s most popular concerts.

Where to Drink: Tretter’s

Tretter’s is a 1930’s styled bar serving alcoholic concoctions designed to impress the most discerning cocktail connoisseur. Try Zido, a mix of cachaça, white rum, coconut syrup, lime and papaya juice, or the New York, a fusion of bourbon, lime and grenadine – all washed down to the sounds of smooth jazz and blues.

Where to Eat: Terasa U Zlate

Image courtesy of Terasa U Zlate

Terasa U Zlate is a rooftop terrace restaurant serving international cuisine with a side order of spectacular city views (and it has repeatedly been voted the best restaurant in the Czech Republic). It’s a member of the Moet & Chandon Privilege club – a special programme designed for 100 restaurants around the world that gives exclusive access to a selection of vintage champagnes. After a fine lunch in the summer, guests can stroll through a private gate leading from the terrace directly to the Royal Gardens of Prague Castle.