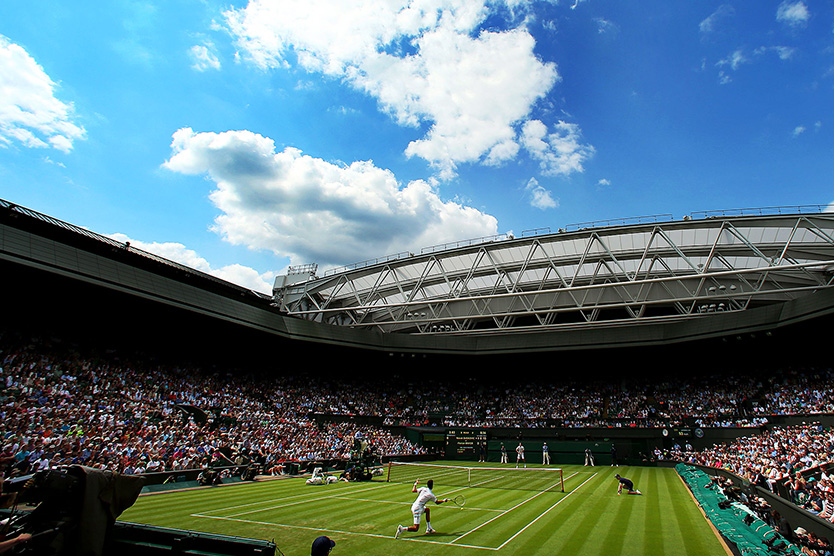 The Wimbledon Tennis Championships are not only the soundtrack to the British summer; they are the jewel in its crown. It marks that time in the British social calendar when it seems like the world revolves around what’s going on in SW19.

More akin to a Royal garden party than a tennis grand slam, it is an inimitably British occasion, the quintessential embodiment of sporting excellence, luxury and lifestyle. With Victor’s inside knowledge, avoid the crowds and raise the bar of your experience.

Located in the leafy South-West of London, Wimbledon is served by a variety of options for flying in and out of. Charter a jet into City Airport and London is your oyster; fly in privately to Farnborough, Biggin Hill or RAF Northolt for the quickest route to the action. 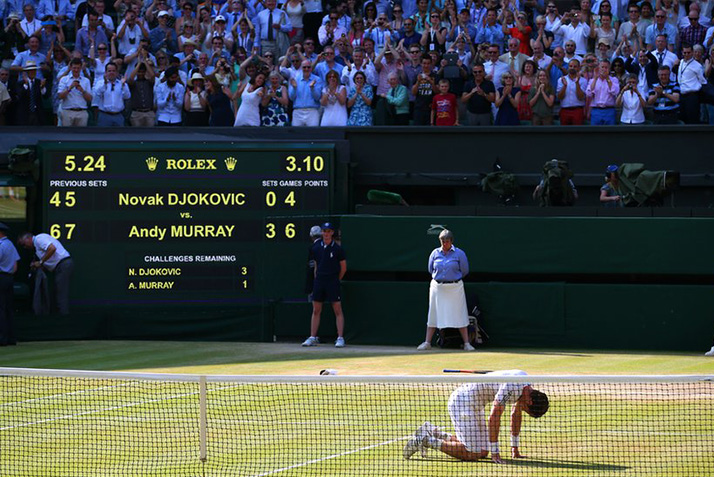 Steeped in history, Wimbledon is the oldest and most prestigious tennis tournament in the world. Back in 1877, 200 hundred spectators paid one shilling each to watch 22 players take part. Last year, the total number of spectators over the 13 days rose to 491,084. The most dedicated, set up camp right next to the All England Lawn Tennis and Croquet Club, home of the tournament.

On its doorstep is Cannizaro House. With its relaxed atmosphere, this chic country house hotel not only provides unparalleled access to the tennis but it puts you right amongst its movers and shakers. 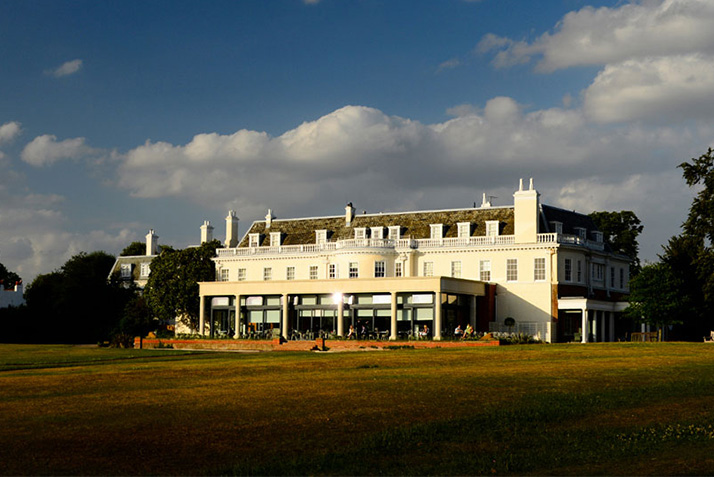 Image of Cannizaro House via theresident.co.uk

For the Championship fortnight it becomes a home away from home for many of the players, ex pros and high-profile fans. Whether enjoying the terrace’s beautiful views, afternoon tea in the Orangery or one of 46 luxury rooms named after legends of the game, all talk is of tennis.

Wimbledon is synonymous with its traditions, none more so than strawberries and cream.

Around 28,000kg of the official Kent Grade I Elsanta strawberries were devoured during the 2014 Championship. Served with 7,000 litres of cream, they were washed down with 300,000 cups of tea, 230,000 glasses of Pimm’s and 28,000 bottles of champagne. Tennis is a thirsty spectator sport, it seems. 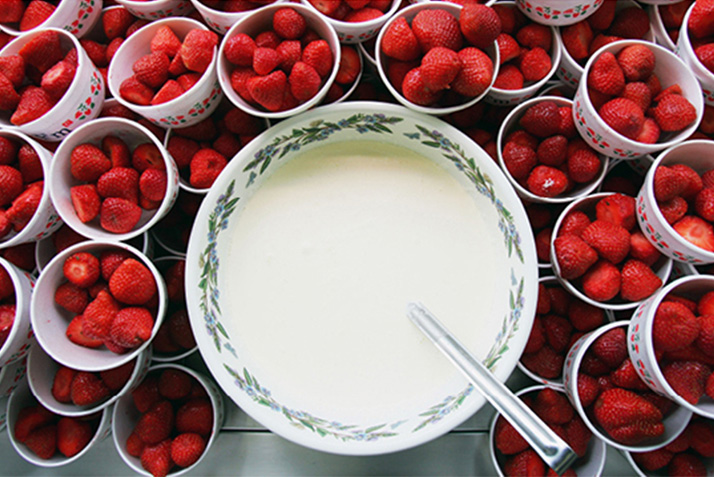 Image of Strawberries and Cream via Ralph Lauren Magazine

There is more to Wimbledon’s cuisine than fine fruit and cucumber sandwiches, however. Within the grounds, the best food and most exclusive views are at the Centre Court Skyview suites and The Gatsby Club.

Across the road is one of the Championship’s best-kept secrets. The Lakeview Restaurant is the idyllic location for Michelin star food from renowned chef Angela Hartnett. Golf buggies take guests back and forth and afternoon tea hampers are available for those long tiebreaks (we’re looking at you John Isner and Nicolas Mahut, responsible for Wimbledon’s longest ever match, lasting 11 hours 5 minutes).

A short hop away is one of the London’s most scenic Michelin star restaurants, Petersham Nurseries Café. Located in a plant-filled glasshouse, it serves European, seasonal food and is the perfect sporting respite.

Back at the tennis and all eyes are on Centre Court. The Royal Box, home to 74 dark green Lloyd Loom wicker chairs, is the ace up Wimbledon’s sleeve.

These days players are only required to bow or curtsey if HM The Queen (who has attended in 1957, 1962, 1977 and 2010) or HRH The Prince of Wales are present but you are as likely to see celebrity royalty David and Victoria Beckham as you are the Duke and Duchess of Cambridge. Friendships are cemented in the Royal Box too; such as Hollywood actor Bradley Cooper and Gerard Butler’s 2014 pastel blue suited bromance. 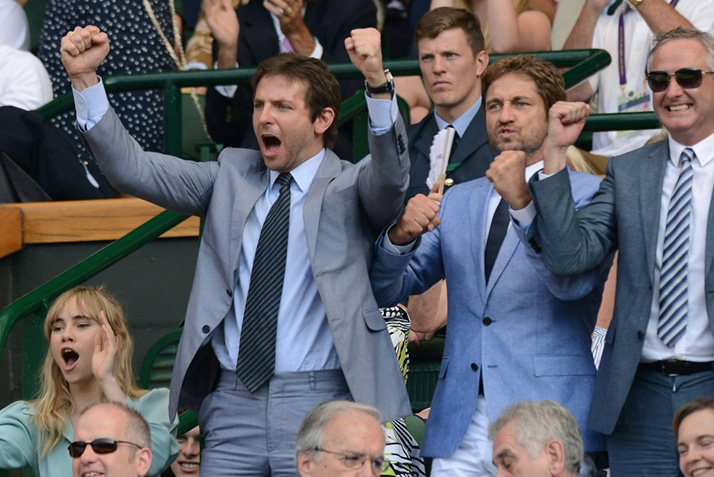 Image of Bradley Cooper and Gerard Butler in the Royal Box via dailymail.co.uk

It’s not just in the Royal Box that the style stakes are high. Fashion plays a unique role in Wimbledon’s britishness. A predominately white tennis attire rule was introduced in 1963, updated in 1995 to an “almost entirely in white rule”.

Rules are rules at Wimbledon, as Tim Henman discovered in 1995. He became the first ever player to be disqualified, accidentally hitting a ball girl with an angrily smashed ball. The mortified Henman later gave her a bouquet of flowers, but he had fallen foul of the Championship’s strict principles.

Ladies and gentlemen, play is suspended

If the infamous Wimbledon weather serves up rain, then London is on your doorstep. So too is the British countryside, full of escapes from the city’s crowds.

Step up the hill to Wimbledon Village and enjoy some retail therapy, practice your swing at the privately owned Wentworth Golf Club, or divot stomp between chukkas at the Guards Polo Club, another of London’s summer calendar highlights.

Nothing evokes the British summertime quite like Wimbledon at full tilt: tennis balls thwacked back and forth as appreciative crowds raise champagne flutes before turning their attention once more to strawberries and cream.

Join the very best of British traditions, celebrate it in style with Victor’s recommendations.

Fly with Victor to The Championships, Wimbledon