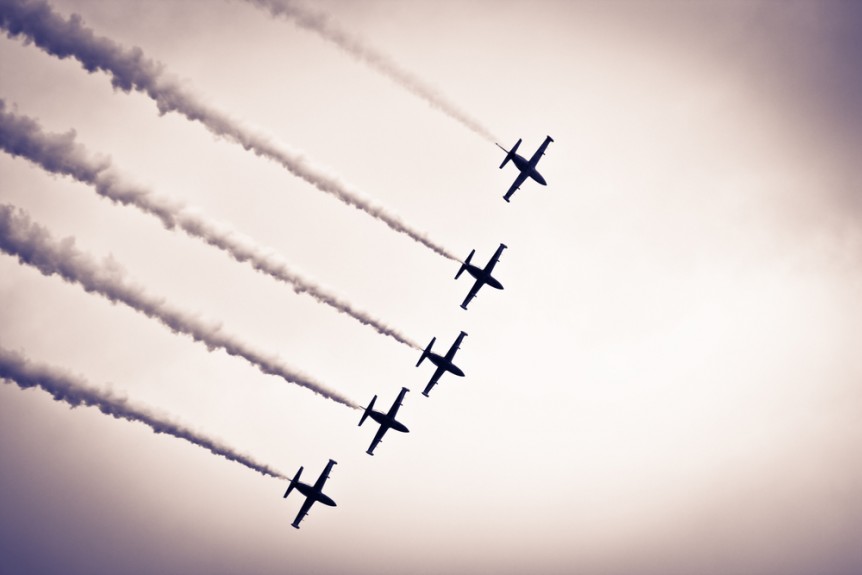 Farnborough International Airshow is one of the most important dates of the year for both aviation industry representatives and enthusiasts. Tracing its origins back to Hendon in 1920, it has now been running for over 60 years, alternating with Paris Air Show, at Le Bourget Airport. This year’s event is expected to attract over 80,000 people over the public days of 16th and 17th July.

Up, Up and Away: The Flying Displays

Attendees will be treated to aircraft both old and new, with a flying display featuring the Lockheed Martin F-35, the latest generation stealth multirole fighter due to be in full service with both the British and US military within the next few years. This will be the F35’s first public display in Europe, but hopefully not the last for this ground-breaking machine.
The Red Arrows will provide their usual spectacle, and will be joined by a selection of World War Two aircraft showing that they still have what it takes to thrill the crowd. Vintage aircraft on display will include the Catalina flying boat, P51 Mustang, and Royal Navy Swordfish.

Hotly anticipated is the debut of the Airlander, the world’s largest aircraft, entirely constructed in the UK. Developed by Hybrid Air, this colossal helium airship is a throwback to the zeppelins of the past which used to ferry passengers around the world. This prototype has the ability to stay airborne for up to five days with passengers, and two weeks unmanned. Once in service, it is expected to serve in a variety of roles from surveillance to cargo transport, with a significantly lower carbon footprint than any other form of air transport.
The team at Farnborough have joined forces with the UK Drone show to showcase the latest technology and innovative usage for modern drones. Exhibits will include drone racing, aerial photography and flying demonstrations, which will show how these incredible machines can be used for search and rescue missions, even in the harshest environments.

Despite its popularity among aviation enthusiasts and families looking for a great day out, the show is only open to the public for the final three days. The first four are dedicated exclusively to trade deals, among the aerospace and defence industry. Over the last few years, Farnborough Airshow has hosted both the current generation of airliners, including the Airbus A380 and the Boeing 787, and the latest business jets: the Bombardier Global 6000 and the Gulfstream G650. In 2014 alone, orders taken for aircraft totalled £140 billion! As well as the commercial sector there is a vast amount of business going on behind closed doors, with military delegations expected from nearly 50 different governments around the world.

Don’t miss the Business Aircraft Park, where you will find the latest offerings from every major business jet manufacturer. From short-range turboprops to large-cabin ultra-long haul jets there is something for everyone. In total, more than 1,500 exhibitors from over 35 countries are expected to attend this year, although many will keep their displays and products under wraps until closer to the show. Look out for the latest offering from French manufacturer Dassault: the brand new Falcon 8X. With a spacious stand-up cabin and the ability to reach anywhere in the world with only one stop, the Falcon 8X is expected to challenge aircraft from the current business jet front-runners Bombardier and Gulfstream.

Fly with Victor into London Farnborough Airport. Be advised that due to the flying display, no slots will be allocated during the following times: