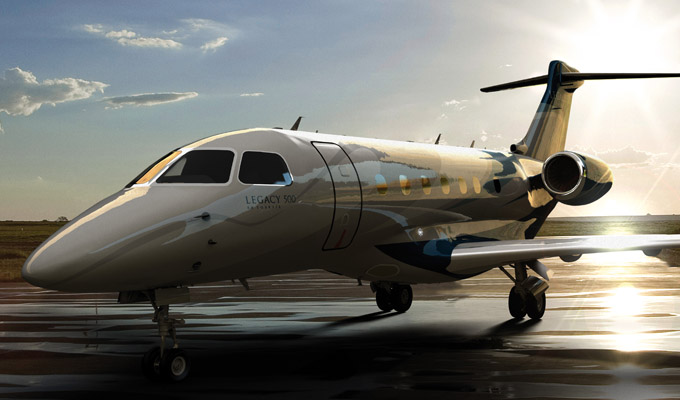 Every industry contains numerous rivalries. BMW vs Mercedes, Microsoft vs Apple, Xbox vs PlayStation and so on. The aircraft manufacturing world is dominated by Boeing and Airbus, but there is plenty of competition elsewhere – notably between Bombardier and Embraer. Many comparisons can be made between the two. Both companies have built up an impressive portfolio of aircraft types. Both produce aircraft for the military, commercial airlines and of course business jets. And both will proudly proclaim they are a close third behind Airbus and Boeing.

In recent years the demand for smaller regional jets has proven profitable for both companies. Embraer from Brazil successfully introduced their E-Jet series of aircraft, followed closely by Canadian Bombardier announcing their C-Series range.

It is somewhat surprising however that where business jets are concerned neither have truly competed with each other in the same jet class. Embraer has focused on light to super light aircraft, while Bombardier leads the large cabin and ultra-long-range market. Up until now only the Legacy 600 and Challenger 850 have actually gone head to head.

All this is changing with the introduction of the brand-new Embraer Legacy 500, an aircraft specifically designed to compete with the class leading Challenger 350 from Bombardier.

So how do the two compare?

At a glance, you’d be forgiven for thinking they are identical. Both will do just over 3,000 nautical miles. Both will cruise comfortably at 45,000ft, both can seat 9 passengers comfortably (and offer different cabin configurations), and both have cruise speeds of around 460 knots. But when you look a little closer, the Legacy outdoes its rival in almost every way.

The Legacy 500 is faster and can take off using shorter runways. With a longer cabin, it can seat more people (up to 12 in one configuration), take more baggage and has WiFi as standard. The technology in the cockpit is the most modern of any jet in its class, and yet the Legacy 500 costs almost $6 million less.

Now we said the Legacy outdoes its rival in almost every way…. the cabin of the Challenger 350 is wider, its range is 75 nautical miles more, and many of the bells and whistles that come as standard with the Legacy can be purchased as upgrades. The 350 also has a solid pedigree, when you consider its predecessor the Challenger 300, as well as its older siblings, the 604, the 850 and Global Express series.

When it comes to chartering and sales, only time will tell which aircraft comes out on top. Both are still very new to the market. There are currently only five Legacy 500s available on the open charter market, and around 15 Challengers 350s (though this rises to over 100 if you include the previous generation Challenger 300).

We hope that Victor fliers will be able to provide their own personalised feedback in due course – until then, the jury is out.

For aircraft specifics, please view our side-by-side comparison in the table above.