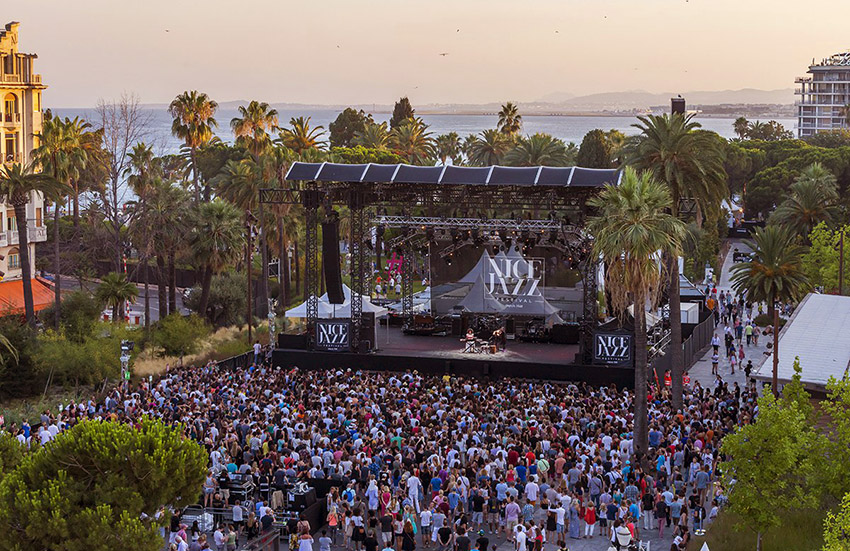 The French Riviera has long been a magnet for the glitterati, those that come to soak up the region’s unique spirit. This is a gilded part of the globe with its own brand of glamour that seems to stand the test of time. The capital of the Côte d’Azur is Nice – a sophisticated and sassy city that sits on the curved Bay of Angels. It’s tempting to stroll along its pretty promenades, eat at the marvellous restaurants and bask in its Mediterranean glow at any time of year, but the Nice Jazz Festival – one of the Riviera’s biggest annual events – is an especially good excuse to go.

The festival was inaugurated in 1948 with none other than Louis Armstrong and his All Stars headlining, and it was heralded as “the first jazz festival of international significance”. Since then, other jazz greats have graced the event, including Ray Charles, Ella Fitzgerald, Dizzie Gillespie, Herbie Hancock and Miles Davis. The line-up has grown increasingly eclectic in recent years, with a healthy mix of traditional and modern music styles.

This year, the Nice Jazz Festival will run from 16th to 20th July. The foremost innovator of funk, George Clinton, and the leading figure of Cape jazz, Abdullah Ibrahim, will both be working their magic, alongside Laura Mvula, Massive Attack, Parov Stelar and Robert Plant. The event is now set on stages within the Promenade du Paillon – an enchanting 30-acre urban park that opened in 2013 – and 45,000 people are expected to attend.

For couples keen to visit, Paris does not have the monopoly on French romance; the Côte d’Azur is crammed with beautiful architecture, perfect beaches, and quaint medieval villages to explore hand-in-hand. Here we suggest some of the hottest spots to head to during the festival.

Hôtel du Cap-Eden-Roc
There are few places on the French Riviera that ooze chic as much as the Hôtel du Cap. Resplendent gardens and the Mediterranean coastline frame this Grande Dame of a hotel, a favourite with film stars. Its visitor’s book aptly named the ‘Golden Book’, has signatures and witty comments from swathes of the A-list guests that have visited over the years, from Chagall and Picasso to Clint Eastwood and Cate Blanchett. Nip to Nice in a speedboat and then luxuriate in this legendary establishment.

La Petite Maison
After a stroll down the famous Promenade des Anglais, duck into this beloved restaurant on the edge of the old town. The cuisine is rustic, hearty and local, with every regional dish accounted for. The Niçois platter is the perfect starter to tantalise the taste buds: think pissaladière (an onion, anchovy and black-olive tart), stuffed vegetables, courgette flower and aubergine fritters, artichoke salad and fresh prawns drizzled with olive oil and lemon juice.

Chez Teresa
In the heart of the old town and in the middle of the market in Cours Saleya is a stall selling socca, a speciality of Nice. This traditional snack is a large wafer-thin chickpea flour based crêpe cooked in a large open pan and sprinkled with black pepper.

Alziari
Head to Rue Paradis or Galeries Lafayette if it’s designer clothes and accessories you’re after, but for pure olive oil step into the whimsical cave of Alziari in the old town. The oil is produced just outside of Nice and sold around the globe, but in this fine grocery store you can buy it alongside tapenades, herbs, soaps and olive wood products to take home.