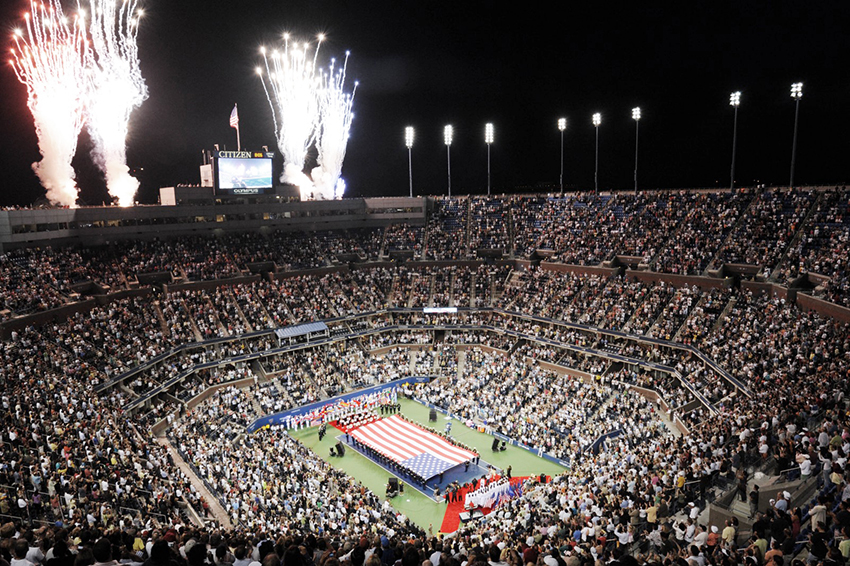 Tennis fans the world over will soon be in an Empire State of Mind as the U.S. Open lures the dominant supernovas of the sport to the USTA’s Billie Jean King National Tennis Center August 29 to September 11. The Grand Slam to end all Grand Slams, will Novak Djokovic regain the fire he lost at Wimbledon? Will Serena Williams recapture the glory she ceded in her Grand Slam run in 2015? Collect your oversized chapeau and sporty chic whites…it’s off to the courts you’ll go.

From the gleaming new retractable roof above Arthur Ashe Stadium to the brand new, 8,000-square-foot Grandstand, fans will see a transformation to the type of world-class tennis viewing that has long been the dream of the tourney organizers. Don’t despair: the inspired New York skyline will still be visible from the Arthur Ashe Stadium when the convertible roof is open. With 2000 additional seats, an outdoor viewing patio and elevated wrap-around walkway, USTA Executive Director and Chief Operating Office Gordon Smith says the shiny, new Grandstand Stadium “redefines spectacular.” Add to that, 10 existing courts have been rebuilt and all will feature larger video screens so you can catch every wince up close and personal.

As in years’ past, the U.S. Open is a combination of the best of the best and a showcase for rising stars and heroes of the game. Don’t miss the Champions Invitational, pitting 16 former Grand Slam Champions in doubles matches. Past participants have included Lindsey Davenport, John McEnroe, and Martina Navratilova. Also exciting are the Junior Championships, which feature the greatest under-18 players in the world. With past winners like Andy Roddick and Jennifer Capriati, you’re certain to glimpse the future of tennis on these courts.

With gourmet fare at every turn, you’ll certainly not want for anything. Choose raw fare from Sushi Superstar Iron Chef Masaharu Morimoto or mingle with the masses at Aces. For a modern clubhouse vibe and a great steak, reserve a table at celebrity chef David Burke’s Champions.

Fly with Victor to the private FBO at La Guardia (LGA). Though the commercial side is a high-density traffic airport, La Guardia’s private FBO is an entirely different experience and is ideally situated for transport to the City or direct to the Tennis Center. If only New York traffic from the City to Flushing Meadows could be so civilized…

To the Carlyle with its prime Madison Avenue address within walking distance of boutiques, galleries museums and Central Park. Why not spring for the Art Deco 3-bedroom, 2,600-square-foot Empire Suite with its magnificent views of Central Park, walls outfitted in cashmere, Metropolitan Museum of Art curated private collection and Thierry Despont-designed elegance?

If you fancy yourself more of a Village person, opt for The Greenwich Hotel’s TriBeCa Penthouse. The 6,800-square-foot suite is an incredibly artful fusion of the neighborhood’s industrial past and the ancient Japanese aesthetic of Wabi with repurposed items throughout like grates from the Louvre and sinks crafted from 17th-century stone. Need a breath of fresh air? A 4000-square-foot multi-level terrace awaits…

Sushi Nakazawa – If its sushi you seek, look no farther than Sushi Nakazawa.  Opt for the Omakase of Chef Daisuke Nakazawa, a 20-course meal that has no rival.

Rebelle – A former burlesque hall sets the stage for Rebelle’s edgy design and modern bistro fare. New York Magazine’s Grub Street considers it one of the city’s most interesting places and a top pick for wine drinking with a wine list it calls “an embarrassment of riches.”

What to watch en route to the Open:
Woody Allen’s “Matchpoint,” of course. With the ever-alluring Scarlett Johansson, the compelling Emily Mortimer and Jonathan Rhys-Myers as a charismatic Irish tennis pro, this Cannes Film Festival favorite will serve you from the hotel lobby to Billy Jean King and beyond.

Tennis Tunes to Turntable:
The most sensible soundtrack to your U.S. Open trek might just be a band named, of all things, Tennis. A husband and wife indie duo, she a former state-ranked tennis player, Tennis has a legion of fans and has appeared on “Conan” and the like. Or you could turn to Enrique Iglesias, husband of Anna Kournikova. And don’t miss the video of Marin Solveig & Dragonette’s Hello featuring Djokovic as a line judge.

Required Reading:
A must is David Foster Wallace’s “On Tennis.” Five essays published between 1990 and 2006 with important insights like “How Tracy Austin Broke My Heart” will solidify why The New York Times’ A.O. Scott calls Wallace “the best tennis writer of all time.”

Honey Deuce Anyone?
Strawberries and cream was last month…The U.S. Open is all about the Honey Deuce. As synonymous to the Open as the Mint Julep is to the Kentucky Derby, this craft cocktail of Vodka, lemonade, Chambord and honeydew melon “tennis” balls are the kind of courtside concoction anyone can ace.