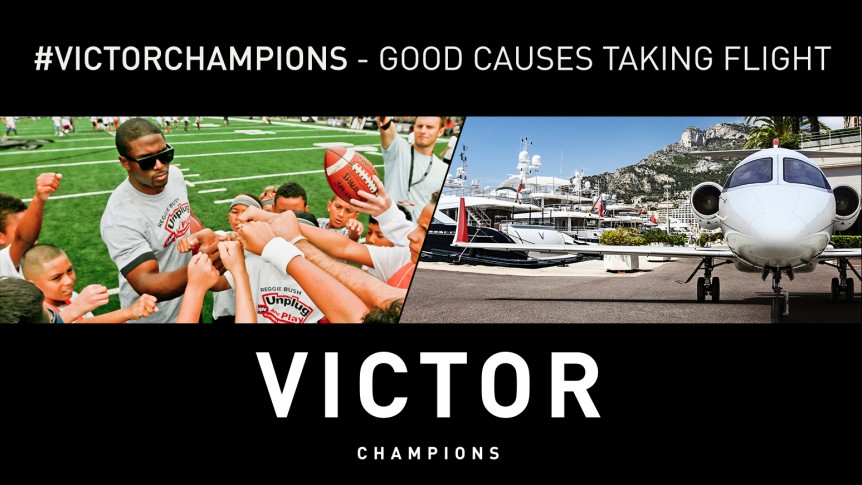 Victor, the world’s largest on-demand private jet marketplace, has a mission to move and empower the influential people shaping our world today. Supporting that mission, the company’s new charity initiative Victor Champions aims to support a variety of signature projects developed in partnership with its members and non-profit organisations around the globe.

Victor Champions is a unique philanthropic platform to do more in the sky, engaging with exclusive brands, partners, and ambassadors through everything from seamless travel experiences around global charitable events to bespoke donor programs. Rather excitingly, it launches this week.

Victor is providing the seamless jet travel between the Charity Weekend’s biggest events. Reggie and his high-profile friends (including fellow football royalty Calvin Johnson Jr, Brian Cushing, Thomas Williams and Golden Tate III) will be joined in the sky by Victor ‘donors’ and fans, who were given the opportunity to bid for a place on the flights via a recent online CharityBuzz auction. Victor is also busy ‘on the ground’ providing those same donors and fans with exclusive access to much of the Weekend’s all-action itinerary.

This special Victor Champions experience includes entry to the VIP Skybox above Stadium Court at the Association of Volleyball Professionals’ (AVP) premier Manhattan Beach Open volleyball tournament, and the chance to be front and centre for the eagerly-anticipated celebrity fundraising portion of the meet. Afterwards, guests fly back to San Diego, check into the renowned Lodge At Torrey Pines hotel, and prepare for an official Weekend kick-off party with Reggie and friends. The following day, they’ll play a celebrity golf tournament at the private, ultra exclusive Del Mar Country Club in Rancho Sante Fe, before joining Reggie for a wrap-up brunch at San Diego’s slick Kettner Exchange.

Reggie Bush founded the 619 Charitable Fund in 2010 to support the causes that directly benefit today’s youth. When Bush isn’t a champion on the field, he’s a champion for children – living proof that kids have the potential to be a force for progress and positive social change in their families, communities, and the world; however, they must first be nurtured and protected to reach this sky-high potential.

Victor, in turn, is now helping nurture charities and good causes towards successful take-off by supporting the philanthropy of Victor Champions such as Bush.

Stay tuned! We’ll be chatting to the sporting icon about his career to date and fundraising with Victor in the coming days. Meanwhile if you’re still interested in purchasing a donor package for the Reggie Bush Charity Weekend, or would like to support or suggest future Victor Champions initiatives, please contact us on info@flyvictor.com.