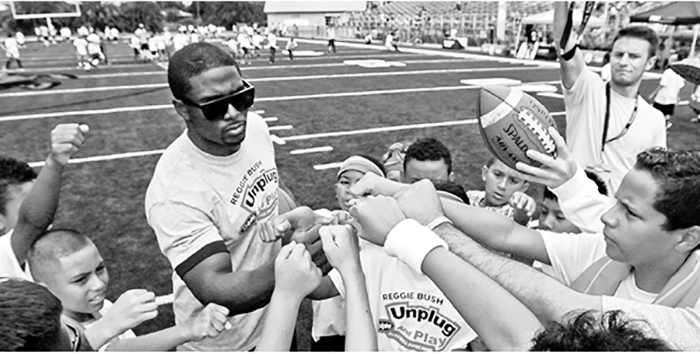 Reggie Bush is not kidding…

Victor Champions is the brand-new new philanthropic venture from Victor, and to celebrate our inaugural event in conjunction with the Reggie Bush Charity Weekend we talk to the legendary American football star about ‘moms’, motivation – and why charity begins from birth.

Hi Reggie, how are plans shaping up for this year’s Charity Weekend?
It’s looking really good – I’m very excited with all the stuff we have going on. Victor is making things easier by helping us with a flight from San Diego to Los Angeles for our charity beach volleyball game, which should be a lot of fun.

Why do you think it’s so important to support kids in particular?
When I was growing up, I had big dreams to be a football player and I was lucky to get a lot of support to get me there – so I love helping out and giving out in any way, shape or form. This year we’re working with St. Jude Children’s Research Hospital again. We have a great relationship with them, and it’s amazing to be able to put a smile on a kid’s face who’s going through some tough times. We’re also working with The Birthday Party Project, which helps homeless kids to celebrate their birthdays. I thought that was amazing, such a cool idea.

Your mum played a big role in shaping who you are – what are the lessons she taught you?
My mom was raised in foster homes. She’s very ambitious, she’s a hard worker, she’s very driven – and I get that from her. Two years ago she went back to college to get a degree, and now she’s taking acting classes – she’s also a police officer. She’s just a great person.

Do you think you would have got to where you are without the support of your elders?
No, I don’t think so – they were always there for me.

How did becoming a father change you?
It gives you a better perspective on life but it’s a fulltime job – I’m still on the clock when I get home from football practice. Obviously I’m just really enjoying raising them but I’m more tired with my kids than after training!

What’s the best piece of advice you were given growing up?
Work hard at it and don’t let anyone tell you that you can’t achieve it – there are a lot of different examples of success from unexpected corners of the world now. A lot of people see something and want something, but the difference is that few are willing to go the extra mile and endure the struggles to get it. You have to work extremely hard to get what you want but you can do it.

What are the transferable skills you bring from the pitch to your charity work?
There are transferable skills I can apply not just to charity work but to life, like being dedicated, disciplined, working extremely hard, and willing to work with others as part of a team – that’s a huge part of it. You have to be resilient because there’ll be a lot of obstacles. Sometimes people see a company that seems as if it has exploded onto the scene overnight but that company has been built up for 10, 15, 20 years.

What would you have done if you hadn’t become a footballer?
That used to be a tough question because I didn’t think of anything else. I always had football in my sights and there was nothing else I was going to settle for – there was plan A and I was going to achieve plan A no matter what. But now I’m looking forward to someday starting my own company.

And finally, you’re known as the “Dancing Man” because you’re so quick on your feet. Will we see you on Dancing with the Stars anytime soon?
My wife is actually the dancer – she’s a professional – so I’ll leave that to her!

If you would like to support or suggest future Victor Champions initiatives, please contact us via info@flyvictor.com