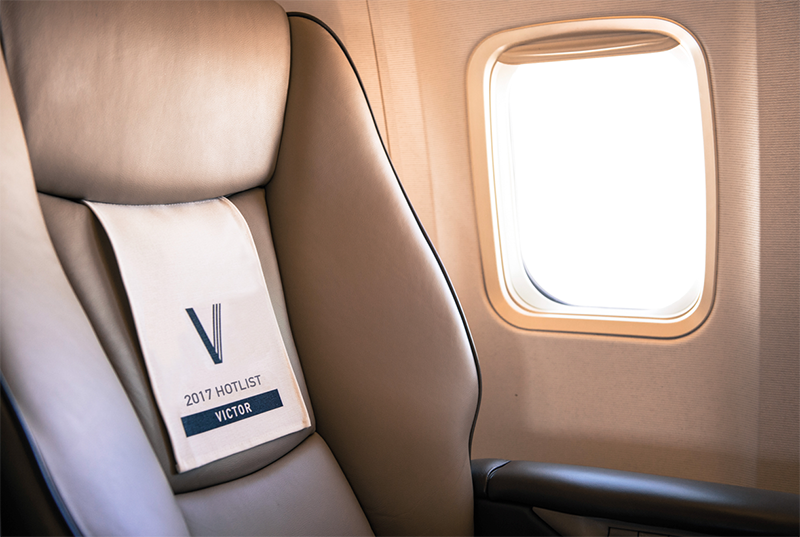 Combining traditional British luxury with the always-on attitude of the smart-tech set, Victor likes to do things differently.

From Scandi food in the Mexican sun to French art in the Arabian desert, here is a selection of Victor’s perfect under-the-radar picks for what to do and where to go this year.

ST MORITZ | Downhill all the way

This year’s Alpine World Ski Championships take place on the slopes above Switzerland’s most glamorous resort. Avoid the crowds and head up the infamous Piz Nair mountain, home of the 1948 Olympics and the perfect spot from which to drink in the majesty of the Engadin Valley down below. And with the Samedan private terminal 10 minutes away from town, transfers have never been easier.
FIS Alpine World Ski Championships, 6-19 February
– Fly with Victor to St Moritz: Samedan Airport (SMV)

The brainchild of EasyGroup’s Sir Stelios Haji-Ioannou and named after the capital and port of the island, the Gustavia Yacht Club opened in November 2016 to rave reviews. Somewhat surprisingly for such a boat-friendly destination, the Gustavia is the first of its kind for St Barths in some time – yet has already become a firm fixture on the social calendar.
Gustavia Yacht Club, all year round
– Fly with Victor to St Barths: Gustaf III Airport (SBH)

TULUM | All you can eat

For seven weeks in April and May, the best food in the world will be found in Mexico when award-winning chef René Redzepi opens the latest outpost of his Noma restaurant in Tulum. For $600, diners can expect a multi-course tasting menu with drinks pairing, and to discover taste-buds they never knew existed.
Noma Mexico, 12 April-28 May
Carretera Tulum – Bocapaila, KM 8.1, Zona Costera, Tulum, Quintana Roo 77780
– Fly with Victor to Cancun: Cancun Airport (CUN)

13 yachts already registered for the Caribbean’s hottest race Loro Piana Caribbean Superyacht Regatta. This year’s event already looks set to make a splash – but for those who prefer to remain dry when aboard, it also comes with a motoryacht programme attached. Watch the action unfold from the calm of your deck, and spend a (very long) weekend floating in between some of the world’s most beautiful scenery.
Loro Piana Caribbean Superyacht Regatta & Rendezvous, 10-13 March
– Fly with Victor to BVI: Terrance B. Lettsome International Airport (EIS)

NEW YORK | Art of the matter

Following its successful US debut last year, the world of Tefaf continues to grow with a spring exhibition at the Park Avenue Armory in New York. Focusing on modern and contemporary art and design from the 20th century on, the show is a welcome addition to the ever-expanding scene – and a welcome respite from the more commercial options out there.
Tefaf New York Spring 2017, 4-8 May
Park Avenue Armory, New York
– Fly with Victor to New York: Terterboro Airport (TEB)

PARIS | Stay with me

Following extensive renovations, the Hotel de Crillon reopens just in time for summer. Home away from home to the great and the good since 1758, it was the original venue for the world’s most spectacular coming-out event, le Bal des Débutantes, in 1992 until it closed for refurbishment in 2012. With two new suites designed by Karl Lagerfeld, the tradition for spectacle looks set to continue.
Hotel de Crillon soft opening, June-July
10 Place de la Concorde, 75008 Paris
– Fly with Victor to Paris: Le Bourget Airport (LBG)

If you want to know where global media and tech is headed, make the weeklong Allen & Company Sun Valley Conference your next stop. Attracting business and political leaders alongside major names in the philanthropic and cultural spheres, past guests have included Bill Gates, Warren Buffett and Tony Blair (Rupert Murdoch has also been known to make an appearance).
Allen & Company Sun Valley Conference, 4 July
Sun Valley, Idaho
– Fly with Victor to Sun Valley: Idaho Airport (SUN)

ITALY: TBD | Dress for success
Trust upstart Italian fashion brand Dolce & Gabbana to disrupt the traditional couture circuit with their new invite-only sales model, in which 200 of their most loyal customers are indulged with a weekend of cocktails, dinners and dancing – and the chance to buy the ‘Alta Moda’ collections before anyone else. A twice-yearly event, summer’s destination is still to be announced but Capri, Positano and Sicily are all safe bets.
Dolce & Gabbana’s ‘Alta Moda’ collections island party, July
Location to be revealed
– Fly with Victor to Naples: Naples Airport (NAP)

CALIFORNIA | Take your pick
September in California is Wine Month, and what better way to celebrate the local harvest than by sampling a glass (or two) of something red, rich and deeply rewarding. With a plentiful supply of winery events happening around America’s top wine-producing state, including VIP tastings and wine-paired dinners, all you have to do is decide on your favourite grape.
California Wine Month, September
Various locations throughout California
– Fly with Victor to Napa Valley: Napa Country Airport (APC)

ABU DHABI | Castle in the sand

A major development of the 30-year partnership between the city of Abu Dhabi and the French government, the Louvre Abu Dhabi is almost ready to welcome its first visitors. At 24,000sq m, the museum should have ample space to demonstrate its commitment to bridging the gap between Eastern and Western art (and Victor’s partnership with Etihad Airways will get you there in style).
Louvre Abu Dhabi, opening autumn 2017
Saadiyat Island Cultural District, Abu Dhabi
– Fly with Victor to Abu Dhabi: Abu Dhabi Airport (AUH)