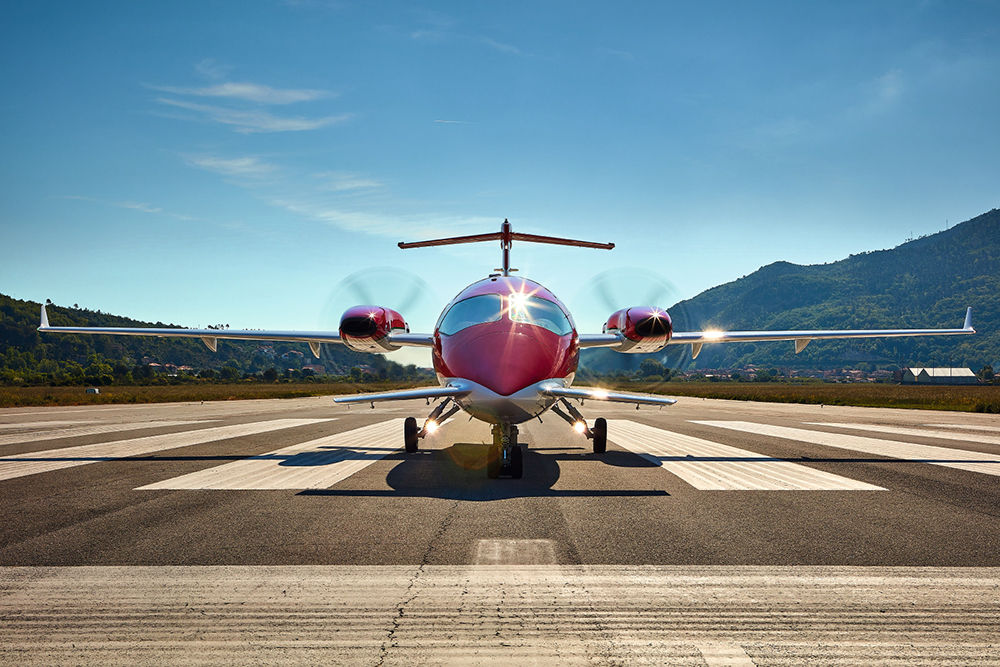 Imagine: you’re James Bond, making a fast getaway from the scene of a hair-raising hit job. Sprinting towards the (conveniently placed) nearby runway, with SPECTRE’s henchmen in hot pursuit, you’re confronted with a couple of clapped-out helicopters (no, too rusty, can’t take the risk), an antique cropduster that hasn’t seen service since 1923… and over on the far side of the airfield, a unique-looking– almost catfish-like – private plane.

Being Bond, of course, you’ve seen the insides of countless cockpits, and been trained to pilot pretty much everything that’s fit to fly. Still, as you scramble into this mysterious craft, with its distinctive nose forewings and rear delta fins, the thought occurs: “This is one of the most beautiful things I’ve ever been inside of. I wonder how it flies?” And then you lift off, and a wide smile spreads over your face… The Piaggio Aerospace Avanti Evo might look like it comes straight out of that famous film franchise – but it’s here, it’s real, and, compared with other private jets in this bracket, it’s a snip at £5m.

As with so many great objects originating from Italy, from the radio to the typewriter, this is a coolly elegant, beautifully designed and very powerful little marvel; and like those inventions, a truly radical piece of hardware to boot. As Piaggio’s CEO Renato Vaghi says, “This aircraft grants a revolutionary way of travelling, combining luxury and speed with environmental care.”

“This aircraft grants a revolutionary way of travelling, combining luxury and speed with environmental care.”

Compared with other light aircraft, the Evo cuts CO2 emissions by up to 40 per cent thanks to a unique (and uniquely efficient) design that incorporates a threelifting- surface configuration. There’s a main wing near the fuselage’s rear, a smaller nose wing, and a tail wing. Meanwhile, an elegantly curved fuselage helps reduce drag, while raising performance by over a third.
With the private jet market enjoying a boom right now, this wonderful thing holds its own, aesthetically and technically; the fastest turboprop currently in the air, it’s capable of doing 402 knots (around 463mph) at a ceiling of 41,000 feet. Little wonder it’s been dubbed the “Ferrari of the sky”.

“Should that fast getaway be in order, the Evo needs a mere 974 metres of runway to take off”

Founded in 1884 by Rinaldo Piaggio in Genoa, the company helped usher in the world’s first helicopter, along with twin-engine seaplanes for the Italian Air Force and other light transport aircraft for both the military and civilians. In 1960, it began manufacturing jet engines too, and today it’s the only company in the world that designs both engines and the planes to put them in. Even though the Evo’s innovative design suggests a brand-new aircraft, this is in fact its third generation. It was launched some 25 years ago with an exterior inspired by the Learjet, that iconic, game changing PJ beloved of celebrities such as Dean Martin, Sammy Davis Jr, Elvis, Marlon Brando, Paul McCartney – and old blue eyes himself, Frank Sinatra (who successfully wooed Mia Farrow with a ride on one during a date).

It’s the inside that counts

The interior noise level – pretty much the same as a regular conversation – and the low cabin pressure ensure a pleasant flight. Full air conditioning, folding tables and adjustable lighting also add to the cabin’s appeal, which is currently configured for six or seven passengers (eight is in the design stage). The reclining and rotating chairs are swathed in butter-soft Poltrona Frau leather, and the seats are made by legendary Italian electronics company Iacobucci. It’s compact but not cramped, with a stand-up height of 5’10”, and the baggage compartment is large enough to house ski gear and golf bags.

“The reclining and rotating chairs are swathed in butter-soft Poltrona Frau leather.”

If you’re looking to fly further than London to Moscow, other aircraft are available. But the Evo’s maximum flight range of 1,809 nautical miles should be more than enough for most, making it the ideal get about for weekends on the slopes or the links. And should that fast getaway be in order, the Evo needs a mere 974 metres of runway to take off (as opposed to a Boeing 747’s 1,500 metres), so you’re in the air almost immediately.

As Vaghi says, the Evo boasts “superior climb performance, huge fuel savings, lower emissions compared to aircraft in the same class, and the biggest stand-up cabin”. Plus, it’s a beauty. An artist and a scientist in equal measure, Italy’s most famous Renaissance man Leonardo da Vinci would surely approve.