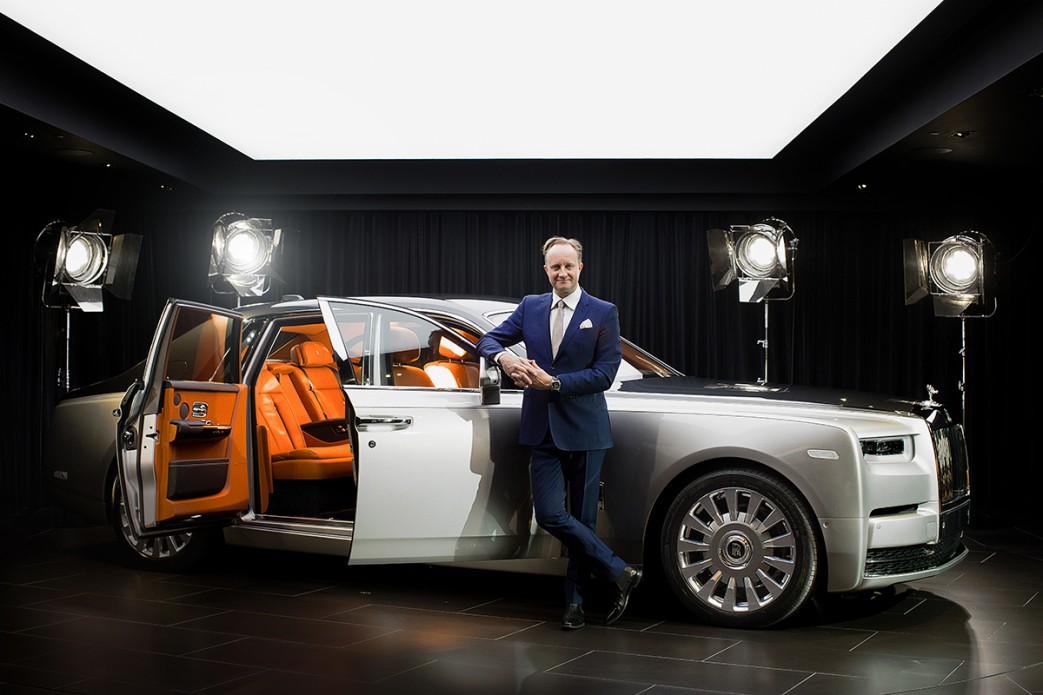 Domenic Staelberg reports from this year’s Geneva Motor Show, where he spoke to Rolls-Royce Design Director Giles Taylor about rebooting the brand for a younger audience, the future of luxury mobility, and why his overriding mantra will always be: “Yes we can!”

Victor: Can you tell us about you and your history with Rolls-Royce?

Giles Taylor: I’ve been with Rolls-Royce for seven years, six of which I’ve been Design Director. I saw the implementation of Wraith, created Dawn, created Phantom, and I’ve created the next generation, a high-body car. I was trained at the Royal College of Art in London and I’ve always been passionate about designing cars. And here we are creating the modern generation of Rolls-Royces.

The average age of our ownership now is 45 years old. When I tell people that they can’t believe that that actually is the average age. We’ve got young entrepreneurs coming out of the Asia Pacific market, and older demographics from Europe and North America. But actually it’s a 45-year-old average.

Victor: Is that one of the reasons for the launch of the Black Badge line? To attract a younger audience?

GT: Yes. We have had a pull, rather than a push, in the marketplace. We didn’t need to do that. But many of our customers were saying, “Actually, you should do it, because [a Rolls-Royce is] the kind of car I’d like to drive if you had carbon-fibre wheels and an upgraded braking package and steering ratios and stiffer suspension settings. All the things that make it a young person’s drive. So it’s a driver response. Black Badge is all about people behind the wheel rather than the chauffeur-driven cars.

Victor: Now we’re in the flagship Rolls-Royce, the big Phantom VIII, the newest generation. What’s your thinking behind the design of Phantom?

GT: Phantom is the oldest nameplate. It’s been in existence for about 90 years. It’s the oldest nameplate on the road today. The first Phantom was designed by Sir Henry Royce. And it is this ultimate statement of luxury motoring, very much about the rear seats, the “magic carpet ride”. In this generation, we’ve taken it even further with more bespoke pieces like the Gallery. It’s this unique – it was a world-first – innovation made of glass that stretches the full width of the dashboard. In the space behind the glass, we can set art. We can bring artists in and we believe a lot of our customers actually want to customise to that level. It is a difficult part of the car, with its width and the space constraints, but we have actually managed to place – as you have probably seen from the atelier – all sorts of different combinations of art.

On the exterior of the car, Phantom has this lovely sleek elegance. If somebody said to me, “What is Phantom?” I would probably say, “It’s presence,” because the front of the car has this very iconic grill. And the Phantom actually integrates that grill – for the very first time we could actually bring the grill back into the bodywork. And somehow, this Phantom, compared to the other Phantom cars, is more dynamic with multiple lines that give it a little bit more of a driver’s focus so it’s less about the carriage in the rear seat.

Victor: You turned it into a new version of the Phantom and still left some of the design open for the customer to customise if they wish to do so.

GT: Especially on the interior of the car, yes. On the exterior you can obviously choose any colour you want, and choose the wheels. But on the interior especially, we really wanted to open the space up with this sort-of art gallery where the customer can say, “I want this,” and we take a commission to create something unique. We find that our UHNW customers really enjoy curating that space. They don’t want the same car as their neighbour, it has got to be individual to them.

Victor: What is the car you’re most proud of?

GT: I think it probably is Phantom because it has such a legacy. It’s like designing a sequel to a film. After so many sequels you can lose the essence of the original and people will say, “Well, is it a Phantom? Is it a Rolls-Royce?” And in that context, it is sometimes more challenging to modernise. My bottom line is: we have to modernise, we have to bring in new technologies. The outgoing Phantom is 13 years old, it has so many magical qualities, it is a challenge to improve it.

Victor: Is there a type of car that you always wanted to design?

GT: I have always wanted to do a two-seat. But I am talking about something which is very fast and probably electric. I am not talking about now, I wouldn’t want to say, “Giles Taylor says Rolls-Royce is going to build an electric car.” It’s a very personal statement I am making. But I like the emotional side of motoring, the thrill of fast motoring, and efficiency and sustainability. So we are not talking about big combustion engines. I’d like to go into more of a rewarding toy experience – going fast, big smile on your face.

Victor: And have you thought about designing something other than cars? Like jet interiors?

GT: Rolls-Royce has been approached and we have discussed whether we can branch out into luxury spaces like buildings or even superyachts, and naturally aircraft as well. And I am interested in that because I think there is a huge crossover in terms of luxury spaces and the transition between those products for UHNW. They expect the best level, they expect the best convenience and technology interfaces.

Victor: How long does it usually take from the very first idea of a car to the finished product?

Victor: So you always have to think far into the future when you start with a car.

GT: Yes, we have to have a little crystal ball to distinguish where the trends are, what the design is. It is part of our job to create context.

Victor: Looking further into the future, the topic of mobility and self-driving cars, where do you see Rolls-Royce in that space?

GT: We already have autonomous cars: [sitting in] the rear seat of a Rolls-Royce is autonomous because you have a guy driving the car. So we don’t see an urgent need to embrace autonomous driving in the sense of Phantom. Nevertheless, as we’re getting towards the era of autonomous, we would always offer that option.

Victor: What is the most bespoke Rolls-Royce you have ever designed? And is there anything you ever had to say no to?

GT: The most bespoke Rolls-Royce would be the Sweptail, the coach-built car from last year. That was a first for us because we’ve changed the whole car. In terms of crazy-bespoke, we’ve never had something where we’ve said we couldn’t do it. We’ve had champagne presenters, fridges, normally just interior conversions, so nothing as fundamental as an installation like this. In the Sweptail the tissue cases in the B-pillars and the Dom Pérignon [bottle] presenter were all pieces commissioned by the client. We can work to satisfy those needs. We don’t say, “No you can’t.” We say, “Yes you can!” and we find a way to make it.