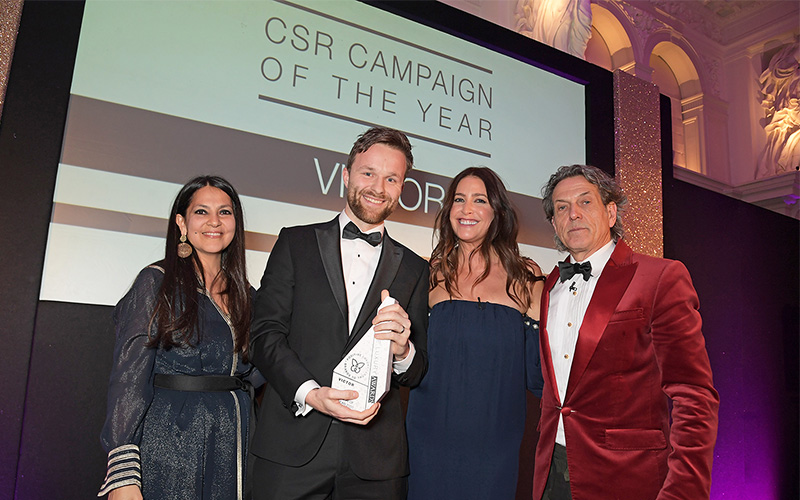 At a carbon neutral and elegant black-tie ceremony at London’s Kimpton Fitzroy Hotel, we were honoured to win CSR Campaign of The Year at the inaugural Positive Luxury Awards 2020 – a powerful convergence of some of the world’s most iconic luxury brands.

Hosted this year by presenter Lisa Snowdon and Stephen Webster MBE, The Positive Luxury Awards is a global celebration of sustainability and innovation within the luxury industry and recognises companies and individuals affecting positive change in businesses and the world.

We are delighted to be heralded for propelling the sustainability agenda forward in aviation; not an easy feat when you operate in an industry that has long ignored its responsibility for global warming. The CSR Campaign of The Year Award acknowledges a creative marketing communications campaign that has measurably enhanced awareness of the complex challenges and opportunities associated with sustainability in its industry and inspired action.

Our 200% carbon offsetting on flights as a standard is not only an industry-first, but a world-first initiative to which we’ve brought unrivalled transparency. Unlike many others, we detail the exact UN REDD+ projects supported in which the carbon credits are invested. We’ve also partnered with the industry bodies and bio-diesel producers such as EBAA and Neste to support the awareness and adoption of sustainable aviation fuel.

Diana Verde Nieto, Co-Founder and CEO of Positive Luxury commented, “VICTOR’s mission to drive aviation towards a more sustainable future, engaging in nature-based carbon reduction projects, is making them a leader in the industry.”

This is the second accolade for our #BeyondOffset campaign to drive private aviation through the next stage of innovation to a more environmentally responsible future, also winning ‘Outstanding Commitment to Positive Change’ at the Luxury Briefing Awards at the end of 2019.

In the company of some of the world’s best heritage luxury brands, including Bentley and Louis Vuitton, as well as newcomers such as Stay Wild Swim and My Wardrobe HQ, it was a powerful coming together of organisations and individuals not just recognising the importance of sustainability but etching it into the very heart of their operations. Special congratulations to all winners and nominees.

We were overwhelmed by the response to our campaign and its success so far bears testament to the power of our network and the appetite for change. There’s so much more still to be done however, so we must keep pushing on. It’s a united effort with the support of our suppliers, customers and the entire VICTOR team with our Founder Clive Jackson as the driving force.

Thank you for supporting us on our journey.